A learned man in the town of Winterhaven

Valthrun is a sage and scholar who lives in a tower within Winterhaven’s walls. On occasion he shows up in Wrafton’s to socialize.

Valthrun encountered Amon in Wrafton’s Tavern and told him he should come to the tower on the next day.

The next day he spoke to Amon about his undead status and asked him to find his friend, Douven Stahl, who was last seen setting out for the old dragon burial site, looking for answers to the recent supernatural ongoings near Winterhaven. He also made some references to a Keep on the borderlands.

Valthrun asked Amon to send Grumble his way. The next day, Grumble, Valsharess and De’Val visited Amon, where he repeated much the same information to them and also took etchings of Grumble. 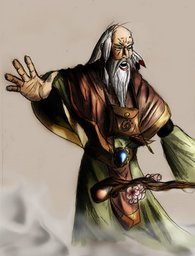