The ruler of Winterhaven and its environs

Ernest Padraig, the Lord of Winterhaven, is descended from the noble family that ruled the area under edict of the old empire. Folks around Winterhaven were happy with Lord Padraig’s father’s authority, and they have found answering to the rules of the new lord no more arduous. On the other hand, Padraig doesn’t have absolute power. For instance, he was unable to raise a force from among the villagers to deal with the kobold problem on the road.

From time to time he visit’s Wrafton’s Inn to meet the newcomer’s in town. All the townsfolk doff their hats and call him Lord.

The adventurer’s encountered Padraig in the Manor House of Winterhaven. He tasked them with eliminating a local kobold infestation that had been molesting the local trade routes. His bounty? 100 gold pieces.

On completion of the quest Amon acted threateningly towards Padraig. 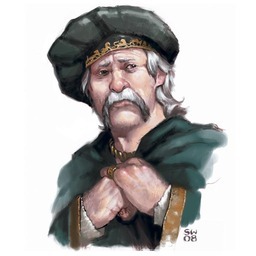